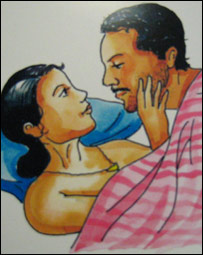 The Indian government’s recent attempt to introduce sex education for school children has provoked a vigorous debate. In the second of two articles, the BBC’s Jyotsna Singh considers the case against a more open discussion of sex in schools.Â

The decision to introduce sex education in India’s schools, aimed primarily at creating awareness about HIV-Aids, has generated howls of protests from many quarters.Â

Many women’s organisations and religious groups as well as several politicians say exposing children to an open debate on the subject, specially in classrooms, will make them “more permissive”.Â

More than 30% of Indian states have rejected the federal government-supported sex education programme.Â

The Secondary School Teachers’ Association in Uttar Pradesh state has even threatened to make a bonfire of books if sex education isn’t withdrawn immediately.Â

Several teachers and student groups have objected to the teaching aid or kit to be used for educating the pupils in the class.Â

One of the main objects that has drawn the ire of the protestors is a flip chart, prepared jointly by the Unicef and government-controlled National Aids Control Organisation (Naco) to facilitate the government’s adolescent education programme.Â

The chart, entitled “Knowledge is Power”, contains illustrations and images dealing with issues related to growing up and relationships in the context of sexually transmitted infections and HIV/Aids.Â

The chart also contains a chapter on essential skills needed to prevent the disease.Â

But protesters say the visuals in the chart are too “graphic”.Â

“We run about 26,000 schools across the country. Our teachers have studied the curriculum and they find it obscene and objectionable,” RSS spokesman Ram Madhav told the BBC.Â

“The whole curriculum is designed to suit the lifestyle in Western countries, where there is a general free atmosphere. In our country we live with families.”Â

Mr Madhav says: “Giving sex education on the pretext that India has a large number of Aids patients is illogical.”Â

He says there are several ways, such as organising separate workshops for Aids awareness for adults, to make people aware of the dangers of leading a “promiscuous” life.Â

India’s main opposition Bharatiya Janata Party (BJP), too, has problems with the curriculum.Â

“This is a value system where you teach them not to have sex till you get married.”Â

Mr Javadekar also points to what he considers a major flaw in the way the curriculum has been designed.Â

“Do you expect teachers to draw on the blackboard, how to wear a condom? This would be surely embarrassing to our teachers. The curriculum must be changed to suit Indian conditions,” he said.Â

”The move should be opposed as the sex education curriculum would disturb the social environment of the country,” he told reporters recently.Â

”Sex education should be restricted to the biology class only. It is incorrect and meaningless to render information about sex and condoms to children. It would only disturb the development of a child’s mind.”Â

He accused multinational companies of ”pressurising” and ”luring” the federal government to start sex education in schools in order to boost sales of condoms and other sex products they manufacture.Â

However, the BJP insists the controversy over sex education is not a political one.Â

“It is not a party issue. It is a social issue and that is why objections have been raised by non-BJP governed states as well,” Mr Javadekar said.Â

The BJP’s assertions are borne out by objections raised by several non-BJP ruled state governments.Â

Protests by left-wing student groups in the state of Orissa forced the government to withdraw the subject.Â

Protesters want the government to adapt the syllabus to local conditions before introducing it in local schools.Â

One women’s group in Karnataka state, Akhila Bharatha Mahila Samskruthika Sanghatane, has questioned the concept behind the move saying it would naturally make children more curious about sex.Â

And there are parents who echo similar fears – that too much exposure may make children more adventurous about sex.Â

“I don’t think so much exposure is desirable for children at a tender age of 10. Everything should happen on time. Curiosity might lead to the desire to experiment,” says Sadhna Aiyer, the mother of a 13-year-old girl.Â

“I believe children lose their innocence if exposed early to this kind of education,” she says, feeling relieved that her daughter’s school in a Delhi suburb has not included the subject in their curriculum.Â

Meanwhile, the RSS says it will continue to fight to stop young children being exposed to the subject of sex.Â

With an increasing number of states ready to drop sex education from the curriculum, the RSS does not seem to be facing an uphill struggle.