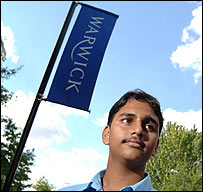 Eighteen-year-old Arvind Aradhya from the Indian city of Bangalore has stars in his eyes these days. Â

He aims to be an astronaut in future and he believes his dreams of reaching the stars are just about to come true.Â

Winning a reality talent hunt show on an Indian television channel has given Arvind an opportunity to study engineering at Warwick University.Â

It is a multi-discipline contest which provides opportunities for students in India to win prestigious scholarships to five renowned universities in Britain.Â

Arvind is the first winner of this multi-stage television series.Â

Speaking with the exuberance and vivacity of a typical 18-year-old, he says that he is “over the moon” to secure such an opportunity.Â

His choice of words is apt: Arvind is an aspiring astronaut – and has his eyes firmly fixed on the stars and moon.Â

Having won the competition from among more than 10,000 students all over India, Arvind says that it has boosted his confidence immensely.Â

“I think that the people at the university believed in me because they must have had really good reasons to award a scholarship worth Â£80,000 to someone!” he says with a tinge of innocent pride in his voice.Â

Students from all over India applied for the scholarship, and were finally whittled down to just four in the final round.Â

The show is the first of its kind in India.Â

“We wanted to create something that rewards people of merit and intellect,” says Arun Thapar from NDTV.Â

“The contestants had to go through various rigorous rounds to ensure there was no compromise with merit. We approached the universities in Britain with the idea of a reality show and they are completely funding the scholarships.Â

“The academic standards for the competition were set by the universities themselves.”Â

On the question of choosing a foreign university rather than an Indian university for further education, Arvind is candid.Â

“The whole approach to education is so different here. The engineering programme at the University of Warwick is a lot more practical with a greater hands-on approach.Â

“More importantly, with the line of work – on this planet or elsewhere – that I intend to pursue, international exposure, and exposure to cutting-edge research is all the more essential, making this migration all the more reasonable.”Â

India has seen a considerable brain-drain in the last few decades, with top talent opting to study abroad and settle there.Â

But with the country emerging as an economic superpower, this trend is beginning to reverse, and many non-resident Indians are heading back in pursuit of lucrative opportunities.Â

So would Arvind eventually like to do the same?Â

“I would like to pursue my desire to be an astronaut and go wherever that leads me, no boundaries,” he says.Â

He argues that the scope of the question should widen to inquire about the planet and not the country that he wants to go to.Â

“Of course, I am patriotic and would like for my dream to be realised through an Indian route. Who knows, with the rapid strides the Indian Space Research Organisation [ISRO] is making, it might even entail going to space as the first true Indian astronaut.”Â

For a teenager yet to see much of the world, he has an amazingly clear-cut approach towards life and his future.Â

His success has drawn more attention to reality shows in India – and there have been a deluge of such programmes over the last two years, including Big Boss – on the lines of Big Brother in Britain – and Indian Idol modelled on the British TV show, Pop Idol.Â

There has been some criticism of the prurient nature of such shows, but Arvind argues that the “scholar hunt” show does not fall into that category.Â

“I had never even thought about an education abroad simply because of the sheer costs involved. Discounting Nepal, the visit to Britain to see Warwick was my first trip abroad.”Â

During this brief reconnaissance visit, Arvind had a glimpse of British lifestyle and food. And like many time first-time Indians, he missed the aroma and flavour of Indian food.Â

He is now preparing to return to the UK in September to begin his studies.Â

Rest assured there will be lots of spices in his bag.