Cheating in Online Assessments during the Pandemic 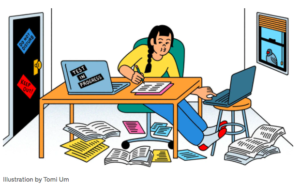 *All interview respondents have been given pseudonyms, and their places of work/study have been excluded due to the sensitive nature of the topic discussed.

Since schools and universities shifted to remote learning in the wake of the Covid-19 pandemic, the question of examinations â€“ how and whether to conduct them â€“ have yielded different answers from exam boards and ministries of education in different parts of the world. As noted in a World Bank blog post, whereas countries such as Norway cancelled written exams in junior high school and high school, Uttar Pradesh in India decided to promote students to the next grade without holding exams. Education boards such as Cambridge International opted to base final grades on predicted grades,Â and the Caribbean Examinations Council postponed its high school exams, basing marks from at least one newly designed multiple choice paper plus teacher assessments.

Where exams and assessments have not been cancelled or postponed but conducted online, questions of academic integrity have risen to the fore. A Wiley survey reported that 93% of university instructor respondents believed that students were more likely to cheat online than in person, and a range of measures (such as having trained proctors monitor test-takers, using lockdown browser, webcams, and plagiarism software) â€“ debated in their efficacy â€“ have been taken to prevent cheating in such settings.

The present situation has raised questions about the effectiveness and relevance of online assessments and exams. Do they serve their purpose during such trying times? Do they serve their purpose at all? Can they be replaced with more suitable practices? Or are they essential and irreplaceable â€“ the only way of fairly providing scarce resources to the most deserving? EFSL spoke to a few students and teachers to hear their opinions.

â€œTo answer exam questions, I would work with a few friends whom I could trust, sharing answers between ourselves and pooling our collective knowledge, which is quite a common practice,â€ said Revatha, a second-year university student studying abroad, who returned to Sri Lanka in March and has been engaged in online classes and assessments since then. These assessments have included midterm exams, a final for all classes, and sometimes weekly tests to judge information absorption. He talked about the lack of motivation to work and revise, commenting that, â€œhome is not an environment that is conducive to studyingâ€. Indeed, many students have expressed struggles attempting to do online school from home – with a lack of routine and a lack of motivation.

Revatha described sharing answers between himself and his friends for exams and assessments as a form of â€œlevelling the playing fieldâ€ â€“ a sentiment reflected in a NY Times article in which it was noted that with the vast majority of students taking advantage of the resources available to them in order to succeed, anyone not doing so â€“ essentially, anyone not cheating â€“ would be put at a disadvantage on a grading curve.

Savitha – an A Level student â€“ responded to a question about whether she had cheated during any assessments held online since the onset of Covid-19 with the comment, â€œalmost all of us do it. Whenever a test has questions from a past paper, almost everyone googles the mark scheme.â€ In addition to looking up the mark scheme, she also said she had read from the textbook while doing a paper because she had missed a number of online lessons and was therefore not prepared with the content presented on the test. When asked how she felt about cheating during exams, she said, â€œI donâ€™t think cheating is really justifiable but in this situation where the education standard is so low and when itâ€™s so difficult to actually learn, you can understand why people would cheat; especially in the higher years where your grades will basically define your future. Since these grades decide our colleges, nobody really has shame in cheating.â€

A History teacher at a secondary school – Ms. Peshani – elaborated on this, commenting, â€œI do feel that if there are those who have experienced clear cut instances of cheating by their students, then that is most likely due to the pressure of having to maintain outstanding grades.” Having conducted several term assessments as well as shorter ones to assess single topics, she commented, â€œGenerally, I do believe that most students understand and appreciate the nature of testing, and are eager to gauge their individual levels of understanding.â€ Yet unable to use traditional methods of supervision with tests and exams, she believes that the most important factor to ensure that exams continue in as normal a fashion as possible is trust between teachers and students. This was reflected in the comments given by A Level Business Studies teacher, Ms. Savitha, who noted that she felt, â€œless in controlâ€ while conducting online examinations as, â€œstudents could have issues with their videos during the assessments, and obviously, we cannot see everything.â€ She also emphasised the element of trust that has to exist between student and teacher if the assessments are to be successful.

Ms. Peshani went on to say that she believes her students are honest enough to attempt the exams they have had as they would on-site. She said she was able to vouch for this as during paper discussions following exams, she often had students go, â€œOh, I got that one wrong. I thought it was option A.” She feels that comments like these are an indicator of, “studentsâ€™ real interest in wanting to learn and gain from their own mistakes.”

Living through unusual and trying times, teachers as well as students have been facing many challenges, which have opened spaces for educators to rethink old ways of doing things. Ms. Peshani described how she has altered the content of online assessments, making use of MCQs (which, she says, are not usually used as they are not a part of the curriculum). She finds that her students are more engaged with this altered form of assessment as they find it more enjoyable and user-friendly via the e-learning platform they use. Revatha commented that rather than examinations, he would benefit from group projects involving discussion with classmates. As he expressed, exams and assessments have already taken on a group discussion element, with students sharing answers amongst themselves.

Many have noted the importance of altering instructional activities rather than focusing wholly on online tests (which tempt students to cheat and don’t necessarily consolidate knowledge and skills), but encouraging immersion, engagement, and the active processing of information.